Motorcycle Accident Statistics in the U.S. 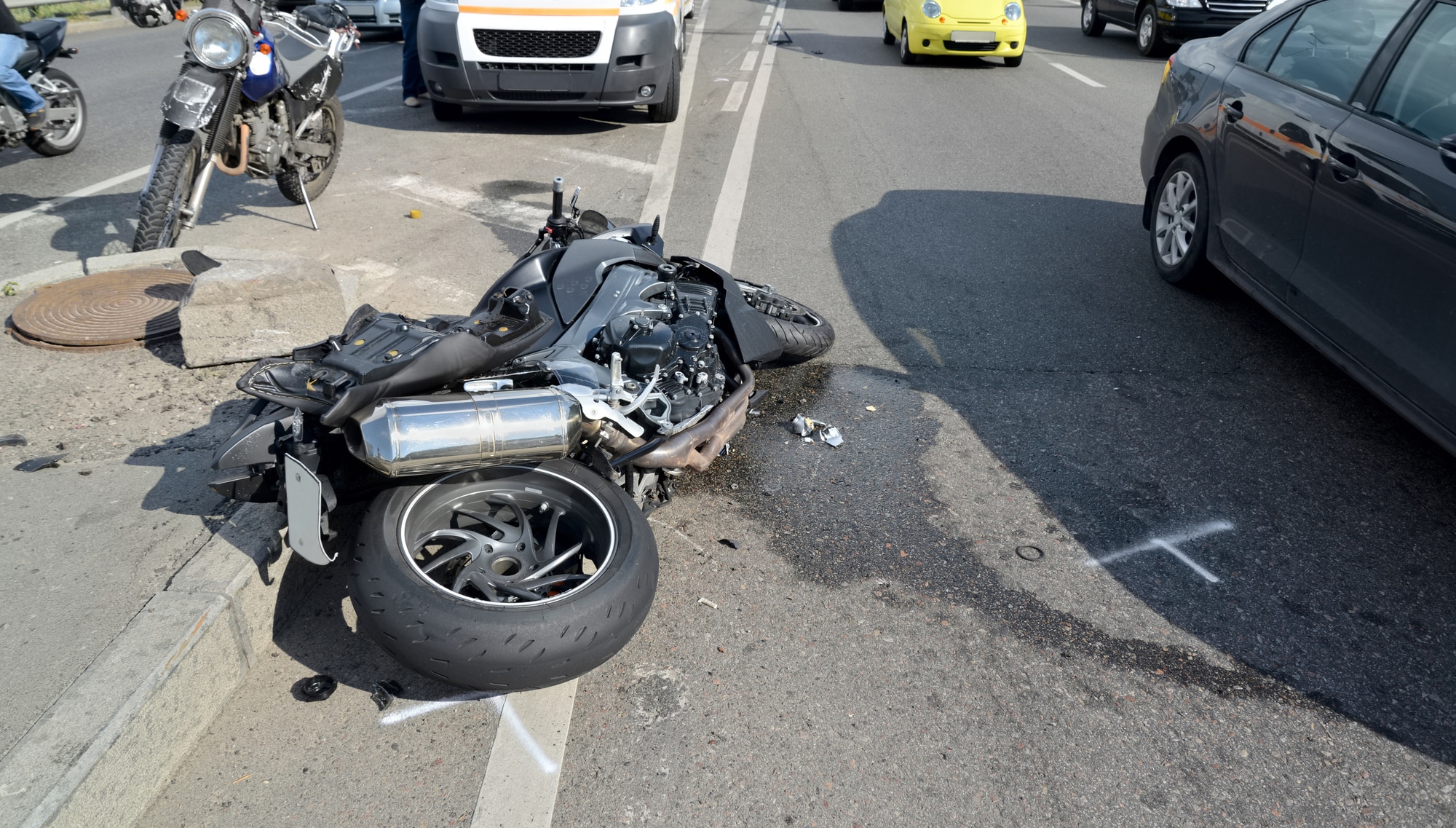 We all know how fun riding a bike can be.

Few experiences are able to match the thrill of cruising the open road. Alas, by design, motorcycles are less crashworthy than enclosed vehicles. Not only that, but their drivers are less visible and stable.

So, it’s no surprise they’re quite prone to accidents and related injuries and fatalities.

Available motorcycle accident statistics really speak volumes. There seems to be heightened risk when riding un-caged, without that steel frame safeguarding you. And we don’t imply that motorcycle accidents are more common because that’s not the case.

The chief problem is that when they do occur, implications are devastating and gruesome.

We’re going to take a look where we stand in terms of both injuries and fatalities. So, without further ado, let’s tap into a body of irrefutable evidence.

We’re not in the dark when it comes to U.S. accident statistics.

National Highway Traffic Safety Administration (NHTSA) regularly publishes its findings on fatal crashes. According to this agency, the number has been steadily increasing over the past 20 years.

In 1997, there were 2,126 people killed in motorcycle accidents. That was the lowest point since the measuring started (1989). Sadly, the number started exponentially rising thereafter, year after year.

In 2007, we arrived at 5,174 bikers killed in accidents. What followed was a series of mild ups and downs.

Sadly, the NHTSA data suggests that motorcyclists were 28 times more likely to die in accidents than car drivers and passengers.

Bikers were also involved in 14% of all traffic fatalities in the U.S. This is quite a lot considering there are way more cars than bikes on roads.

We still have a long way to go.

2017 GHSA study shows the situation varies from state to state.

We can track this via oscillation via motorcycle death percent of total motor vehicle deaths. One of the contributors to this trend is a spike in the motorcycle miles traveled.

These numbers rose gradually across all states. Interestingly enough, we don’t see the same phenomenon when observing other types of vehicles. For them, the number of miles stayed consistent.

So, how do we fare in regards to motorcycle deaths as a percent of total motor vehicle deaths?

Well, not good. Nevada and DC are leading the pack with 22.6% and 22.2% respectively. The only three other states to score above 20 are Wyoming, Colorado, and Hawaii.

Alaska, Missouri, and Rhode Island sit at the bottom of the list. They are all below 8%. Yes, this kind of discrepancy is quite significant, although hard to interpret through statistics.

The average recorded change for all states was +1.6%. Only Alaska and Maryland didn’t report any statistical shifts.

Examining the Case of Motorcycle Injuries

When it comes to traffic injuries, the state of affairs isn’t much better.

In 2007, the number of injuries skyrocketed to 103,000. A positive trend finally emerged after that and lead to a slight decline.

In 2017, 89,000 motorcyclists were injured. That’s significantly less than a decade earlier, but nowhere near the low watermark of 1997.

Overall, the chance of suffering an injury in motorcycle accidents is extremely high. Major culprits behind the negative trend are the surge in motorcycle riding and ownership.

Some of the most common motorcycle accident injuries are to the lower leg, knee, thigh-upper leg, ankle, groin, and foot. Abrasions and lacerations are among less perilous but more common injuries.

Major factors that contribute to the severity of injuries are motorcycle size, speed, and alcohol use. Another important determinant is the presence or absence of protective gear.

In particular, helmets prove to be the single most effective way to keep head injuries at bay. And don’t worry. There’s no evidence they constraint the pre-crash view field or mask traffic sounds.

It’s not hard to rationally explain why the statistics paint such a grim picture.

As we’ve indicated, bikers miss much of the protection that cars and trucks provide. This is why they are far more vulnerable in the face of accidents and crashes. To make things worse, fewer wheels impede road stability.

Then, we have to realize that being smaller, motorcycles are generally more conspicuous. People behind the wheel of a truck, van, or a car often have trouble spotting them.

Moving on, riding a bike requires a set of skills and calls for impeccable judgment. And even then everything can go wrong in a split second. A bike can’t absorb a bump, road debris, or object on the road as well as a car can.

Furthermore, note that around ¾ of all accidents are coalitions with other vehicles. Most often, those other vehicles violate right-of-way rules.

The rest are single-vehicle accidents—the result of a biker crashing into a roadway or fixed object. The culprits behind them are a wide range of rider errors.

Roadway defects and vehicle failures cause only a small fraction of accidents. Weather also has a marginal effect on the likelihood of an accident.

A Matter of Special Circumstances

Next off, we have to take into account unique circumstances statics don’t always distinguish.

At busy intersections, one sometimes has a minefield to navigate. Many car drivers fail to notice bikers around here or run afoul of traffic controls more often than in other sections of the road.

Urban jungles like New York, with their tangled streets, can be quite challenging, even for seasoned bikers. We only have older data from the Department of Health for the Big Apple (2012-2014).

Nevertheless, it reveals motorcycle crashes were the leading cause of death among residents, exceeding auto accidents.

As for older riders, they are exposed to higher accident risks because they tend to have poorer vision and recovery time. Younger people (30 and less), however, are four times as many accidents as older counterparts.

The main reason is they favor superbikes, as opposed to safer alternatives, such as standard bikes and cruisers. Lack of experience is working against them too.

Lastly, we have to underline the key role speed plays. HG.org states that before the accident, an average motorcycle travels at 29.8 mph. The faster you go, the less time there is to react and avert the disaster.

Light at the End of the Tunnel

There are some silver linings in the gloomy clouds.

Or, to put it differently, we can take certain steps to make highways and byways safer. Most fatality scenarios feature: drunk driving, head-on coalitions, exceeding the speed limit, and left turns.

We’ve already mentioned helmets can save lives and more bikers need to wear them. NHTSA argues if 100 of them wear them, 37 avoid death in crashes. Leather and heavy denim are essential too— they can protect your body, arms, and legs.

Let’s also not overlook that in 2017, 29% of people who died in crashes didn’t have a valid driving license. This practice has to end.

Refraining from drinking alcohol is another way to boost safety. The rate of drunk-driving fatalities vs. other causes is 27% according to the Insurance Information Institute. So, you shouldn’t let anything cloud your judgment.

Drive sober and eyes on the road.

Oh, and do yourself a favor and start using visibility gear, such as DOT-compliant helmets and brightly-colored clothing. They work wonders in terms of enhancing your road visibility.

The motorcycle accident statistics confirm our worst fears and suspicions.

Numbers have somewhat fluctuated over the years, but one thing is crystal-clear. Bikers are overrepresented in all studies on traffic accidents. The fatality and injury rates are exponentially higher when compared to car driving.

Things get dangerous lightning-fast and without you being the one to blame. There’s only one approach that makes sense in the light of these woes. Namely, we can afford to be cautiously optimistic at best and extremely cautious in any event.

The good news is you can do certain things to stay on the safe side. Beyond everything else, uphold the best driving practices— no need to flirt with speed limits. Stay alert, gear up properly, and always obey the law.

If you had a recent traffic accident that inflicted an injury, don’t hesitate to get in touch with us right away—call 1-800-897-8440 find the best accident and injury doctors near you.